Bugger! Anyone got a spade? 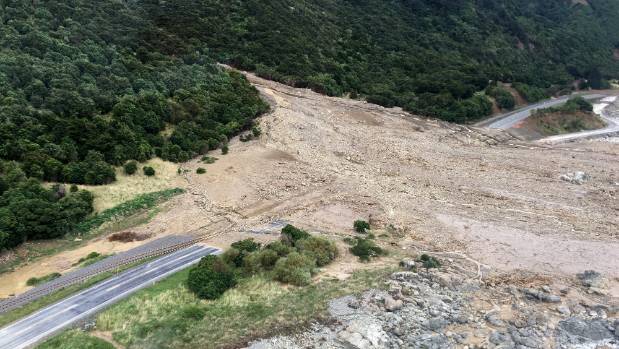 State Highway 1 north and south of Kaikōura will remain closed until at least the middle of next week after ex-Cyclone Gita brought down 300,000 cubic metres of debris over the road at 60 sites. Since Tuesday morning, the route has been closed south of Kaikōura, between Peketa and Goose Bay, and north of the town from Mangamaunu to Clarence – the same sections where significant earthquake repairs were carried out following the magnitude-7.8 earthquake in November 2016. Though the rain dislodged less material than what fell during the quake, when over one million cubic metres buried roads and railway lines , the rockfall is still significant.

The biggest slip came down just south of Okiwi Bay, to the north of Kaikōura. About 200,000 cubic metres of rock and dirt fell there. The slips have also closed KiwiRail’s Main North Line, which runs alongside the highway. NZ Transport Agency earthquake recovery manager Tim Crow said the slips were “very different in nature” to those caused by the quake and mostly came down at new sites. He said they would not require time consuming rock bolting and other slope protection like that needed after the earthquake.  “The great news is we’re all geared up, we’ve already got trucks and excavators working on clearing this material.”

About 95 millimetres of rain fell over Kaikōura in the 48 hours to 9am on Thursday, but it was heavier in the hills to the north and south of the town. MetService meteorologist Josh Griffin said 300mm fell at Rosy Morn, south of Kaikōura, during the ex-cyclone.  State Highway 1 is one of the major arterial routes in the South Island. It reopened only on December 15 after more than a year of repairs and had closed several times since due to weather conditions and ongoing rebuild work. This week’s closure leaves just one way in or out of Kaikōura – the difficult inland route via Waiau. Those travelling between Picton and Christchurch must use the challenging alternative route over the Lewis Pass (SH7).

Crow said crews were focused on getting a single lane of traffic open to reconnect Kaikōura. The reopening date will be reviewed on Monday.  The storm damage had not “gone backwards” on the work that had already been done after the quake. The completed work around Ōhau Point, where the quake damage was most extensive, held up well in the storm, as had the new seawalls near Irongate Bridge. Kaikōura mayor Winston Gray said it was a shame the road was closed again, but the town “just had to live with it for a while”. “We had to expect it because there’s a lot of movement up on those hills alongside the highway.” He said he had heard nothing to suggest it would be shut for a long period. He thought overseas travellers would still come to the tourism-dependent town, though the closure may discourage domestic visitors.

The annual Kaikōura A&P show – a popular horse event – will still go ahead on Saturday, but Gray worried those planning to head down from the north would no longer make the longer trip. KiwiRail Main North Line project director Walter Rushbrook said a lot of areas that had undergone earthquake repair work “held up well in the face of the severe weather”. “Our teams are already under way clearing and repairing the track, but this work will take some time and we will not be in a position to run any trains between Blenheim and Christchurch next week.

“We will get the line open again as soon as we possibly can and we are already working on getting the freight rolling again by extending operating hours at our Blenheim Freight Hub to support transport of freight through the South Island.” Rushbrook said KiwiRail was in close contact with its customers. A possible reopening date would be provided next week.  The Christchurch Transport Operations Centre said motorists using the state highways at the top and west of the South Island should check forecasts and road conditions before travelling.