Timber high-rise tower mooted for Auckland: suggestions on a number of sites

A building expert wants the Auckland waterfront area to get this country’s first timber high-rise, saying the Wynyard Quarter or Britomart areas would be ideal for a significant wood tower.

Damian Otto, director of design and digital construction at Takapuna-based Tallwood, called for Auckland to go green and build a timber tower of up to 15 levels. That would showcase what could be achieved after technical advancements in timber construction, he said.

“I’ve heard suggestions of wood towers on a number of sites,” he said, naming the Quay Park area as well as the central business district but said nothing was definite and discussions only centred on plans, not finished design.

New Auckland towers are all being built in steel (the 39-level Commercial Bay) and concrete (The Pacifica at 57 levels).

But Otto said that could change.

“Wynyard is the best candidate for a wood building because it’s reclaimed land and above the water. Wood buildings are lighter, so you can build more for less. Timber buildings also perform well in earthquakes. It’s only recently that the timber technology has caught up with materials and availability. There’s going to be a doubling of demand,” Otto said of the type of materials needed to build wood high-rises.

He saw Lendlease’s new wood International House in Sydney during its construction in 2016 and said that had led the way in Australasia. It was now time for us to follow.

“International House is a seven-storey office building manufactured predominantly from engineered timber. It is a great example of the benefits of building tall with timber. There is no reason why we can’t follow in our neighbour’s footsteps and build beautiful, quality, timber buildings such as this one,” Otto said.

Last year, property mogul Sir Bob Jones said he planned to take the timber industry to new heights by erecting the world’s tallest wooden office building in central Wellington on the Leader’s Building on Featherston St: a 12-storey 52m block due to be completed later this year.

Otto said wooden building offered advantages over concrete and steel high-rises because not only were they lighter, making them ideal for reclaimed land, but they could be dismantled and the materials recycled.

Lendlease had designed and built International House with longevity in mind, he said.

“In the words of architect, Alec Tzannes, they reached for a design that would weather well, be long lasting and attractive because ‘buildings that are not considered beautiful tend to be demolished, so beauty is at the essence of our concerns about a lower carbon future’,” Otto said.

International House, although a relatively small project by Lendlease standards, had huge significance in this part of the world, Otto said.

A Tokyo skyscraper is set to become the world’s tallest wooden building. Sumitomo Forestry is planning W350, a 70-storey block made 90 per cent of wooden materials, due to be completed in 2041 and to mark 350 years of that business.

“Auckland continues to dominate New Zealand skies with 72 long-term cranes, 55 per cent of all cranes observed across the seven key centres,” Haines said. “The current index highlights a 13 per cent increase in the number of cranes within the Auckland region since the last count in Q4 2016. Twenty-three new cranes have been erected and 15 have been removed from projects that are nearing completion.” Construction work put in place increased by 20 per cent in the 2016 calendar year, making it the fifth consecutive year of growth. 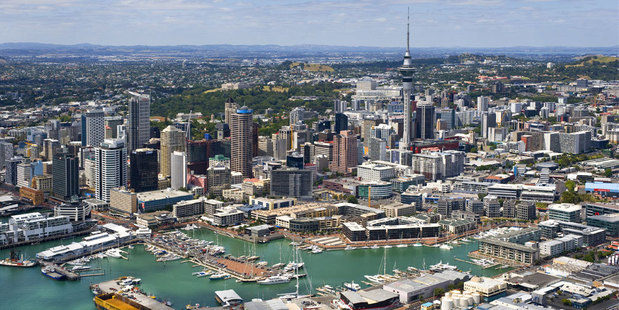 Professional scientific and technical services grew by 3.3 per cent in the second quarter of this year. GDP on an annual basis was up to 3.3 per cent.

New Zealand’s economy grew just ahead of expectations in the second three months of the year as the fastest growth in the services sector for seven-and-a-half years offset shrinking activity in the primary sector when global commodity prices were coming of highs.

New Zealand’s services sector, which accounts for about two-thirds of the economy, rose 1.4 per cent, the biggest gain since the December 2006 quarter, driven by a 3.3 per cent increase in professional scientific and technical services. Service industries grew 2.6 per cent on an annual basis, led by a 5.3 per cent increase in health care and social assistance.

“All 11 services industries increased this quarter,” national accounts manager Gary Dunnet said in a statement. “The biggest increases were in industries that include advertising, employment services and software development.”

The government data comes after a BNZ-BusinessNZ survey this week showed New Zealand’s services sector activity continued to expand in August, extending its period of growth since July 2010. The performance of services index showed employment was at its highest level since the survey began in 2007.

Real gross national disposable income, which measures the country’s real purchasing power, shrank 0.5 per cent in the quarter, its first decline since June 2012, due to a fall in the services terms of trade. On an annual basis, the measure grew 7.8 per cent, the biggest annual increase since the series began in June 1987.