Auckland to Whangarei motorway on the cards

A motorway from Auckland to Whangarei has been flagged by Transport Minister Simon Bridges. Speaking at today’s sod turning to mark the start of the $709.5 million Puhoi to Warkworth motorway, Bridges said over time the motorway would extend to Whangarei, a distance of 162km.

Prime Minister John Key and Bridges turned the first sod during a tour of roading projects north of Auckland, including a new roundabout in the township of Waimaukau. Bridges said the Government had pledged to build a four-lane road of national significance from Puhoi to Wellsford and the entire corridor to Whangarei was very important.

“A lot of people talk about the Brynderwyns and the need for a very strong solution there. “You have got Northport up closer to Whangarei, which is again justification for doing a much more significant job all the way. “Whether that’s to road of national significance standard or something different to that I couldn’t say at the moment … but as Transport Minister I’m very attracted to progress more significant road improvements, not just through to Wellsford but up to Whangarei,” Bridges said.

He said realistically it was not five or six years away, but probably a decade of more away. New Zealand Transport Agency chairman Chris Moller said the agency was looking at the Whangarei to Auckland connection but a motorway could be 30 years away. The Puhoi to Warkworth motorway extends 18.5km over difficult terrain from the Johnstone Hills tunnels just south of Puhoi to just north of Warkworth.

Critics have nicknamed it the “holiday highway” to the intense annoyance of Northland leaders. The new motorway will have two lanes in each direction divided by a central median with a safety barrier. Both Bridges and Rodney MP Mark Mitchell stressed the safety benefits of the new motorway. Said Mitchell: “Safety is definitely a No 1 concern. Unfortunately the piece of road we have to use at the moment comes with hazards and we have too many serious injuries and fatal accidents on that piece of road.”

The project is the second public private partnership (PPP) for a state highway, after the Transmission Gully motorway in Wellington. Under the latest PPP, the Northern Express Group will finance, design, construct, manage and maintain the Puhoi to Warkworth motorway for the 25 years following a five-year build. The motorway is due for completion in 2021. Incentives built into the contract will ensure the motorway is one of the safest in New Zealand with lower grades and be more resilient to natural disasters and road closures.

Bridges said a decision had not been made on whether to toll the new Puhoi to Warkworth motorway. Route protection of the next stage of the motorway from Warkworth to Wellsford is underway. The NZ Transport Agency is planning to release an indicative route early next year. The Automobile Association is delighted that construction is officially underway on the Puhoi to Warkworth motorway extension. “Many people from outside Northland don’t understand what a vital step forward this is for us,” AA Northland District Chairman Steve Westgate said. “It’s not just about safer, quicker and more reliable journeys, it’s about the economic opportunities that come with it. This project will improve our connections with Auckland, New Zealand and the world.”

Alice gains a partner at Waterview

The partner’s name is Dennis, a yellow launching gantry being used to construct the massive interchange to join the Northwestern and Southwestern motorways at the northern end of the project.

“He’s been named by project workers in honour of a workmate who died last year from cancer and is painted yellow to promote the work of the Cancer Society – the charity supported by the Well-Connected Alliance constructing the tunnels.

“We hope Dennis will become a beacon of hope for cancer sufferers and their families, and a reminder to the rest of us of the valuable work done by the Cancer Society,” Mr Parker says.

Dennis – 98 metres long and weighing about 140 tonnes – will be the most publicly visible feature of the Waterview Connection project over the next three years.   It is similar, but smaller, than the blue gantry used recently to construct the replacement viaduct at Newmarket on Auckland’s Southern Motorway (SH1)

Mr Parker says the gantry’s work will be a project within a project.

“The four interchange ramps to connect the two motorways involve the construction of 1.7km of bridge structures.

“It requires placing 270 precast concrete beams, each up to 37 metres long and weighing up to 65 tonnes, to create the 53 spans for the four ramps. The spans will, in turn, support the deck structures.”

“The first ramp being built will take westbound traffic from the Northwestern Motorway to the southbound tunnel – this is one people will use when travelling from central Auckland to the airport,” Mr Parker said.

The gantry was designed and built in Italy specifically for the Waterview project. It was chosen over conventional bridge construction methods to minimise impacts on adjacent archaeological areas and traffic flows.

Dennis began work two weeks ago and will become more visible over the next two weeks when it moves out over Great North Road.

It will also switch from day to night shifts with closures on the road directly below the lifting mechanism. The first closures are scheduled for mid-March, and will affect traffic only leaving Great North Road to go west.

“Using this method of construction will minimise disruption to traffic.  While it is essential for public safety reasons to have no traffic below a heavy concrete beam being lifted into position, traffic can continue to flow normally under the non-lifting parts of the gantry,” Mr Parker says.”

Ongoing information about road closures relating to the gantry’s operation will be provided on the Transport Agency’s travel information webpage for the Western Ring Route: http://www.nzta.govt.nz/stayconnected.

The Waterview Connection is one of five projects to complete the Western Ring Route as an alternative motorway to SH1 through central Auckland and the AucklandHarbourBridge. It is prioritised by the Government as one of its Roads of National Significance because of the contribution it will make to New Zealand’s prosperity by underpinning economic growth and sustainable development for Auckland and its regional neighbours.

The project’s tunnels will each carry three motorway lanes, up to 45 metres below the suburbs of Avondale and Waterview and are due to open in early 2017.

Thumbs up for Wellington expressway

A 16 km expressway north of Wellington has had resource consent granted by a Board of Inquiry.

The road was part of the Wellington Northern Corridor, a development considered to be of national significance, so was referred to the board by Environment Minister Amy Adams last April.

The decision followed the Board’s consideration of the application, submissions, evidence and a two week hearing.

Its decision could be appealed to the High Court on points of law only, and it could not be overturned by ministers.

NZTA’s state highway manager Rod James earlier said the road was expected to be open by mid- to late-2017.

The expressway would not only provide an improved highway route through the Kapiti district but would also increase safety, reduce travel times and improve journey time reliability between the Kapiti Coast and Wellington, he said.

Motorway project given the thumbs up! 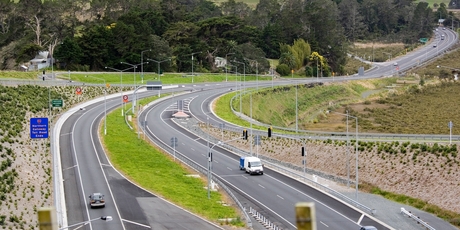 A starting block has been taken away on the 18.5-kilometre, four-lane motorway between Puhoi and Warkworth with construction tipped to start half way through next year.

They say the road is essential to Northland’s growth.

Many critics have dubbed it a “holiday highway” for Aucklanders but the term has rankled Northland advocates.

“The road is not about Aucklanders going on holiday, it is the life blood of Northland. It is absolutely essential for commerce between this region and the rest of New Zealand and beyond.”

Mr Brown said the decision validated the NRC’s inclusion of the Marsden Point rail corridor in its plans. The road would help open the door to expansion of port and rail development, enhanced tourism and industrial growth in Northland, he said.

The way forward – only to Warkworth at this stage – is still jammed with resource consents, property purchases and geological challenges, with the plans not open for public submissions until at least November.

The 18.5km first stage of the “road of national significance” the Government ultimately wants built to Wellsford will include 12 viaducts and bridges, and is expected to be finished in 2022.

NZTA said average daily traffic volumes south to Puhoi are forecast to increase from 17,400 vehicles to 25,000 by 2026, with an expected 51 per cent increase in freight movements alone to or from Northland by 2031.

“The Puhoi to Wellsford corridor has been identified as one of our most essential state highway routes to reduce congestion, improve safety and support economic growth in the Auckland and Northland regions,” Transport Minister Gerry Brownlee said.

Whangarei MP Phil Heatley said the motorway, first proposed back in 2009, will be a key driver of economic growth for Northland.

“A massive consenting process, and property purchases, were always going to be the big hurdle to getting the road construction-ready and I’m pleased it’s finally all under way,” Mr Heatley said.

“The corridor will improve movement of freight and people between Auckland and Northland. And, yes, it brings tourists north. Every dollar our local businesses can squeeze out of an Aucklander is a great dollar.”

All go for Wellington motorway

An expressway north of Wellington has been given draft resource consent, paving the way for the start of construction on the road later this year.

The road was part of the Wellington Northern Corridor, a development considered to be of national significance.

NZTA’s state highway manager Rod James said they would now study the particulars of the decision and provide comments back to the Environmental Protection Authority (EPA) within the 20 working-day comment period.

A Board of Inquiry, which granted the consent, will make a final decision next month on whether the road will go ahead.

Mr James said subject to the final decision, construction of the expressway could begin in July this year, and was expected to be open by mid- to late-2017.

The express way would not only provide an improved highway route through the Kapiti district but would also increase safety, reduce travel times and improve journey time reliability between the Kapiti Coast and Wellington, Mr James said.

“This is a significant milestone towards the progression of this nationally significant road, which would be a key component of the Wellington Northern Corridor Road of National Significance, and provide a much safer, efficient and more resilient transport route north of Wellington.

“April’s decision will provide welcome certainty for the people of Kapiti and the thousands of road users who rely on this busy highway lifeline.”

Green Party transport spokeswoman Julie Anne Genter said the board’s “rubber stamp” came as no surprise, but did not change the fact that the road was a waste of money.

“Can National think of nothing better to do with $630 million of taxpayers’ money than spend it on a duplicate highway on a route where traffic volumes are falling?” Ms Genter asked.

“The Kapiti Expressway has a benefit/cost ratio of just 0.2 – that means for every dollar spent, we get just 20 cents of value. What a waste of money.”

The expressway had been strongly opposed by the local communities, who did not want to see their “houses bowled and their neighbourhoods split in two” so the four-lane highway could be built, she said.

Six other roads of national significance (from north to south):